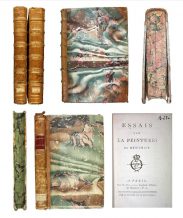 Until now, it was known that some Chamber Bookbinders had worked for these corporations. However, little or nothing is known about another group of bookbinders, numerically larger, who also carried out for these same institutions not only luxury but more modest bindings, such as pastedown, parchment, Dutch and paperback, with hardly any ornaments. It is this group of unknown bookbinders, and for that very reason considered second-rate, the project wants to focus on and make their biographies, their training, their production, their ligatory typologies, workshops, prices, etc. known.

Carrying out this work requires, in the first place, to look up the preserved ledgers and records (18th, 19th and mid-20th centuries) that will provide data referring to the payments to bookbinders, the type of orders placed by the institution, and the amount, among others (minutes, reports, institutional gifts, etc.). Once this information has been recognized and processed, the bindings will be identified and their copies located in the libraries of the different academies under study. The study of each of these bindings will be carried out both from the point of view of its elaboration and structure as well as from the decorative point of view. To arrange all the information from the analysis of the different decorative elements, a catalogue of irons will be prepared. In turn, this will facilitate the location of other bindings made in the same workshops, that are currently kept in other institutions such as the Royal Library of Madrid, the National Library of Spain, the Municipal Historical Library of Madrid, etc.

The project is part of the studies aiming to learn about the history and development of Spanish bookbinding, its binders, and especially the evolution of their workshops in Madrid. Our intention is to carry on with the partial works Matilde López Serrano (1937, 1940, 1945, 1950, 1972, 1976) and Vicente Castañeda (1958) begun, partially consulting the accounting books and the records of the Royal Spanish Academy and the Royal Academy of History to extract information on prominent bookbinders such as Antonio Menard, Antonio, Gabriel, and Indalecio de Sancha and Antonio Suárez, among others. In this way, we aim to fill a gap in scientific production in Spain in an area of book history that has been the object of interest and study in other countries. In France, England, and Germany, the study of bookbinding has always been at the same level as the study of other aspects of ancient books.